The countdown to the release of the February My Monthly Hero Kit continues! Release day is Monday, February 5th at 1pm Eastern/10 am Pacific. Let's join Clare for another look at this wonderful kit...

There's so many great bird images in the kit this month that I almost missed some pretty feather images. Luckily, I was itching to pull out the trusted and true rock-'n-roll technique, and I realized the feathers would work beautifully with it!

I stamped a row of feathers on some white cardstock, inking them first with Mint Julep, and then rolling the edges around in Dusty Blue. I then cut a strip out the cardstock, and used it as an opening to feature some of the beautiful kit woodgrain paper. I heat embossed a sentiment in White on Black cardstock, and then cut the strip out. The bottom of the strip was tailored off by doing some partial die cutting with the Tag Frames Infinity Dies.

To finish off, I added a few gems, and then added some little black dots here and there with a pen.

Win a kit before you can buy it! Just leave a comment on this (and every) Countdown to Creativity post! We'll randomly draw one lucky winner from all the comments left across all the countdown posts, and announce the winner first thing Monday morning, February 5th, before the kit launches at 1pm Eastern. The more you comment, the more chances to win! 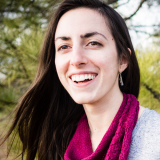 I love this card. It’s simple and so eye catching.

So pretty, can’t wait to get my set.

So cute – I love this card – it is so creative!

You had me at Mint Julep! That color is beautiful!!!! Can’t wait to see the February Kit!!!!!

Thanks for sharing your pretty card & the opportunity to win.

Oh my! I love birds, I love feathers! What a great kit and a great card! I can’t wait to try the inking around the edges technique! I’ve not done that before!

WOW, so excited for my arms kit! Your Kitts are so elegant and comprehensive. Looking forward to many years of cardmaking!

Love the soft look of this feathers. Beautiful!

What a great card! I can’t wait to work with the new kit.

I like the color palate of this card. Waiting patiently for this months kit.

So clever! I’m looking forward to this kit.

Those feathers look so pretty with the light colors and the sentiment is great with it!

Love the soft colors you used on the feathers. Beautiful card!

Really clever, “spread”, with the split in the card! Brilliant!

Love the feathers and the soft colors! Beautiful card!

I love this technique!! I’m going to have to try this with some of my stamps. The feathers look awesome. Thanks for sharing!

I never knew feathers could be so interesting!

Wow! This is stunning! I love the use of the feathers and woodgrain paper is one of my favorites looks.

this card is lovely, I can’t wait to see the whole kit

Such a pretty card & a cool technique!

Love the card so much!! This place is full of inspirational tips and tricks!! I really love to learn a lot and want to create more art pieces after seeing this place!! Lots of ideas to make gorgeous cards for this valentine season!!

I wish I win!!
Fingers crossed!

Lovely…your technique turned out beautifully! this kit is going to play well with my goal to add new textures and materials to my cards. Love the black dots too!

Love the soft feathers. The blue accent is perfect. Thanks!

oh this is just gorgeous! i love this example so far it is my fave!

I love this card, the colors are so beautiful!!!

Love the card and technique!

Love the look of the feathers and then the split of them to give a different look to your card. Love it!

I love the stamping of the feathers on this card.

Oh, that woodgrain paper adds so much to this card. I love the limited color palette with all that texture on there. What a great idea to split the feather images to create an inset sentiment banner!

Very creative! Can’t wait for my kit so I can start creating!

Very delicate and spring-like use of color and design on this card!

Love the different techniques and versatility of the monthly kits. Thanks so much for sharing.

This card is simply delightful…love the clean design with the clever split images. tfs

Fabulous idea – love the feathers with the wood grain peeking through.

lovely card, love the split with the woodgrain cardstock. can’t wait for my kit.

Wow that really changes the looks of everything. Nice card. Thank you.

What a pretty card – I love the colours you used for the feathers and the peek-a-boo of the woodgrain strip.

Very nice card. I love the colours and the feathers.

What a great prize!

I love the feather card. Cannot wait to get my new kit and to see the add ons.

Beautiful layering on the card. The muted colour palette is lovely.

Another beautiful card using the feather stamp! Love the simplicity!

Hi, What a sweet card, I adore the colors you used, very pretty. Thanks.

Ooooh, this has got to be my favorite out of all the 6 cards! I’m off to try and recreate something like this from what I have… Still, can’t wait to do this with the kit contents!

I really like this feather stamp and the wood grain panel accent.

This is one of the most beautiful kits. All of the cards have been lovely!

I love this idea of cutting a strip off the stamped feathers. It gives more dimension to the card.

I love your use of the feathers and using the woodgrain paper.

Love the simplicity and design of this card. The separation and underlying woodgrain strip is perfect for the sentiment. Beautiful!

Love the feathers and halo of blue, very pretty!! Anticipation is building for Monday!

This is a lovely card. That woodgrain cardstock is particularly gorgeous – I love seeing how all these sneak peeks use it.

I can’t wait to see the rest of the stamp sst if you say you almost missed these feather images. I like how simple you’ve kept it and am also excited to see the paper that comes with this set.

Want to try that rock and roll technique.

Beautiful card. It could be a really nice masculine card.

Really like how you used the feathers. Can’t wait to see the entire kit!

Can’t wait to use those feathers!

Pretty soft colors and love the simplicity of this card!

Great way to use the feathers. Love the sentiment too.

this is so pretty!

Crazy about birds! What a cute card

Eep! This card is incredible! Gorgeous in every possible way! Thanks so much for sharing your creativity with us! ♡

This technique is used so beautifully on this design, love it!

Absolutely lovely! Very excited about the woodgrain paper too!

love this color. wonderful color combination. thanks for sharing it … you can never have enough feather stamps :-)

Really like “spread your wings!” Looking forward to seing the whole kit!

Wow! What a fantastic card! I love the peek-a-boo of the woodgrain!

Nice job on the card. Love the color!

I love the gap effect!