From the Vault...With a Modern Twist!

Hi there! Emily Midgett here with you today sharing some inspiration using the From The Vault Flowers stamp set from our 45th Anniversary release! One of my favorite ways to challenge myself with these From The Vault images was creating a modern feel with images pulled from sets over the last 45 years. For today's post, I have three projects featuring a stark black and white color scheme with some pops of bright white and colored pencil. Let's get started with the details! For my first project, I wanted to keep things clean and quick. I began by heat embossing the pot of daffodils and greeting from From The Vault Flowers on a panel of Pitch Black cardstock using white embossing powder, then added a few touches of color using my Caran D'Ache colored pencils. I then used my white colored pencil and a T-square to create a rectangular frame around the exterior edge. The final touch was to add some artsy splatters using White Liquid Watercolor. For my second project, I wanted something with the same modern, black and white feel, but with a bit more details added. I began by heat embossing the watering can and greeting from From The Vault Flowers using white embossing powder, then colored the images, again using my Caran D'Ache colored pencils. After the coloring was complete, I used the Infinity Nesting Rectangle Infinity Dies to die cut a very thin, white frame using Dove White cardstock. I adhered it to the A2 panel of Pitch Black cardstock using Precision Glue for a clean, flat, easily mailed card! My final project involved the same basic details as the previous card, but with a few additions to create some extra interest. I began by heat embossing, coloring, and die cutting the tiger lily stamp from From The Vault Flowers using the Coordinating Frame Cuts. I also die cut a smaller, thicker white frame, again using the Infinity Nesting Rectangle Infinity Dies and Dove White cardstock. After the die cutting had been completed, I arranged the components approximately where they would sit on the Pitch Black card base, then used that as a guide to place my sentiment in just the right spot using my MISTI. I adhered the die cut components using foam adhesive to add extra dimension!

Well, that's all for my projects today. I hope you enjoyed my modern take using some classic stamps From The Vault! Thanks so much for stopping by, and have a marvelous day! 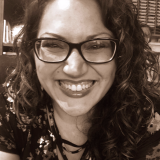 The design of these cards is simple but what an impact they make when done in black and white with a hint of color. I love this look and will have to give it a try. Thanks for sharing!

What a great look on your cards! I will have to give that a try.

Beautiful cards Emily, thank you so much for sharing.

Beautiful cards! Black background made it look so elegant.

Love them! Do you first color with white and then the colored pencil?

These cards are gorgeous! I just love the color scheme you used. :)

Awesome creations! I especially love the Wishing you well card!

These cards are really beautiful Emily! Classic and easy. I love the hint of color. Just beautiful!

Wonderful cards in black and white with a pop of color! The black cardstock is indeed pitch black! <3

Just beautiful! I love the gorgeous stark contrast of colors. Thanks for the great ideas!

Thank you for these cards. They are really beautiful and not too complicated.

these are all so beautiful, Emily – love everything about them. Hello friends! Holiday cheer from the North Pole has landed with our new collection of  Read More Video: No-Line Coloring with the October 2022 My Monthly Hero Kit Winter has come, direct from the North Pole! The October My Monthly... It's almost time to launch the October My Monthly Hero kit – release... It's time for our final round of October countdown peeks! The kit and add-ons will be revealed on Monday... Hello and Happy World Cardmaking Day, friends! At the end of this post we're sharing details... Hello and welcome to the first day of our October My Monthly Hero kit peeks! The new... Around the World with the Global Team Hola everyone! Pocono Pam here! Fall is finally here! I live in Florida now and miss the changing of... How Do You Move Creative Roadblocks?

Do you ever get stuck creatively? I do all the time! I'm a technique person, so I like to... Hey there, friend! Daniel West, here, with a great way to use the Hero Arts Hot Foil Plates without foil!... Saturdays with Sally: Oh So Grateful!

I am grateful for every day! So let’s begin by making a seasonal Thanksgiving/Fall grateful card using...