Creating a Simple Focal Point with an Aperture

Hello there, Michelle here and today I have a card to share with you using the new As You Wish stamp set and coordinating Frame Cuts that were released as an add-on to the August My Monthly Hero Kit. For my card, I started off by stamping the male and female characters from the As You Wish stamp set (or as I like to think of them, prince and princess) on to white cardstock with Intense Black Ink. I coloured them with Copic Markers and cut them out using the As You Wish Frame Cuts. I then set them aside while I worked on my background. Since the images are fairly small in size, I thought that creating an aperture behind them would bring the focus of the card to the middle and therefore, the characters. I took a panel of Dove White Premium Cardstock and cut a heart out of the middle using the Nesting Hearts Infinity Dies. This piece was added to the front of the card base with foam tape. Although there are lots of nice sentiments in the As You Wish stamp set, I wanted the sentiment to be on a line to ground my characters, so I used one from the Many Everyday Messages stamp set. I stamped it on to Pitch Black Premium Cardstock with Clear Embossing & Watermark Ink.

I applied White Detail Embossing Powder and heat set. This was cut in to a strip and added to the card with a combination of foam tape and tape runner (at the edges). I then added the characters on top with foam tape. To finish off, I added clear gems to the sentiment strip.

I thought this card would work well as an engagement card. Thank you so much for popping by today, happy stamping! 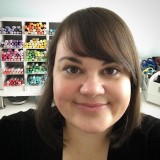 Comments will be approved before showing up.

I was looking for anniversary card ideas, this would be perfect. You never fail to inspire!!

Beautiful card, thanks for sharing this great technique with us!

This is such a lovely card and would be wonderful for an engagement or wedding. Thank you for sharing.

Thank you for this interesting technique! I look forward to using this on many cards!

This card is so cute—what a fun new kit!

I was thinking of it as a lovely no special occasion card for a spouse or friend too!

Love the simplicity of this card. I actually love the whole release.

I love how you made a focal point! The red heart and a place for them to stand really makes the characters stand out. Thanks for sharing!!

I really like your background in this fun card.

Definitely some fun pieces in this release!

More Citrus Inspiration: You Sure Are Sweet!


The friends on our extended release team:

Come visit us at our Factory Store Open Wednesday, 10am – 3pm at our Richmond factory.